True Star Trek Talk “Radio!” Unlike other Star Trek podcasts (all of which we love,) this podcast is Trekkies/Trekkers talking about Star Trek in a format that we think is unique. This podcast is Talk Radio devoted to Star Trek. We cover a variety of topics such as Star Trek news; Series and Movie discussions, Star Trek Books, Comics, Toys (both new and old:) Cosplay, Star Trek Gaming, Interviews, Events, and Social Commentary with a Trek twist. The Human Adventure is Just Beginning… 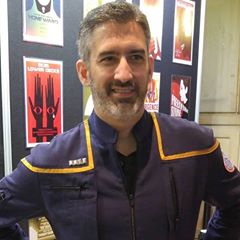 I became a Star Trek fan in 1983.   I remember watching the show for the first time at my friend’s house on a black and white TV with rabbit ears antennae.  We put tin foil on the antenna to try to get better reception. (For some reason in Los Angeles at this time the show was not being broadcast locally, so we tried to pick up a signal from San Diego 100 miles away!)

I quickly fell in love with all things Star Trek including the novels, non-fiction books like the The Making of Star Trek, ship blueprints, comics, FASA’s Star Trek The Role Playing Game; the list goes on and on.  My Mom made me a TOS uniform from the Lincoln Enterprise official patterns that I wore to conventions. Yes, I was doing Cosplay way before that term ever existed!

I remember waiting in anticipation before Star Trek The Next Generation first aired in 1987.  I had read everything that I could about the show (mostly from the excellent Starlog magazine of that era) and even had the TNG writer’s guide that I bought from Lincoln. Although the show got off to a rough start in the first two seasons, by the third season things really started to come together.  I joined the Navy in 1989 and had my Dad tape the show and mail the video cassettes to me in Italy.

Here I am 30 years later and still Trekkin’. I am very excited to be working with my friend John on our new venture with this podcast and I hope everyone enjoys what we are putting together for the show! 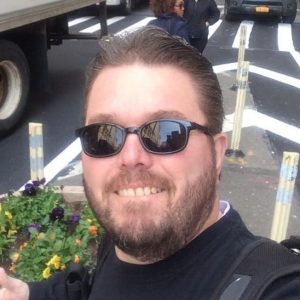 I don’t know the exact year that Star Trek came into my life, it just seems to have always been there. I remember watching reruns of TOS on our family television in the basement of our home in Kokomo, Indiana. Luckily we had cable, which in the 1970s and 80s meant we had 12 channels. When I was a little older I would watch it in my room on a small black and white television that double as a monitor for my Commodore 64.

I still remember when Star Trek: The Motion Picture came out in 1979 and going to see it with my Dad. Since then I think I have seen almost all Star Trek movies on opening weekend. Then came The Next Generation. Like Gaaron I would devour anything I could about the upcoming show, and also order the Writers Bible through Lincoln Enterprises (now Roddenberry.com). I’ll be honest when I watched the first episode I was worried, I remember thinking to myself “who is this grumpy old guy running the ship?” But Captain Picard and the rest of the crew grew on me and I eventually fell in love the TNG as well.

I could never get enough of  Star Trek products as well; I would buy novels, magazines, toys, games, etc. Some of my favorite toys growing up were the Electronic U.S.S. Enterprise (made by the South Bend Toy Company) and the MEGO Enterprise bridge play set and action figures. As I grew older I transitioned into gaming and purchased the Star Trek Role Playing Game by FASA, then Last Unicorn, and finally Decipher. I am greatly anticipating  play testing the upcoming Star Trek Adventures RPG by Modiphius.

My love of Star Trek is as strong today as it ever was and cannot wait for Star Trek Discovery in May 2017. I am looking forward to discussing all aspects of Star Trek with Gaaron on the Trek Talk Podcast. 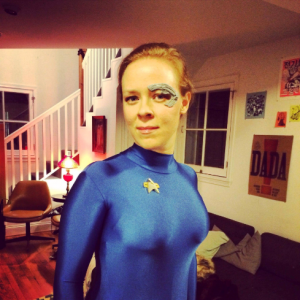 Hi, I’m Ashley!  Hailing originally from Vienna, VA, my very earliest memories were of Kirk impressing the ladies with his karate chops during daytime syndication in the mid-eighties.  I watched with my mom every day, and then when I started elementary school, I made sure to catch the re-runs upon returning home.  From those earliest days I was hooked, tuning in to The Next Generation with my grandfather every evening in the summertime, and watching and taping (at the same time!) Voyager and Deep Space Nine during the weekly broadcasts.  By the time I finished high school, I had amassed a gigantic collection of VHS tapes that ran from floor to ceiling, watched over by a Geordi LaForge action figure on top.  Later, when the last of the Star Trek shows went off the air, I began to read the Voyager and Deep Space Nine novels. I know I have Star Trek to thank for my interest in sciences– between Seven of Nine’s awesome astrometrics lab and Geordi’s magical engineering skills, there was no shortage of inspiration.

In more recent days, I’ve been known to binge watch my favorite episodes and attend parties and conventions dressed as my very favorite Borg.  I’ve even learned how to play RPGs, and the guys have very kindly let me in on their Star Trek FASA games.  On the rare occasion I am not watching Trek, or doing Trek-related things, I enjoy the occasional skiing, biking, rock climbing, and taking walks with my best doggie friend.

I am very excited and humbled to be a part of Trek Talk, and I look forward to many more excellent episodes!